The Ft. Lauderdale Airport shooter is a Muslim convert who years before joining the U.S. Army took on an Islamic name (Aashiq Hammad), downloaded terrorist propaganda and recorded Islamic religious music online, according to public records dug up by the investigative news site of an award-winning, California journalist. Click here to read more. 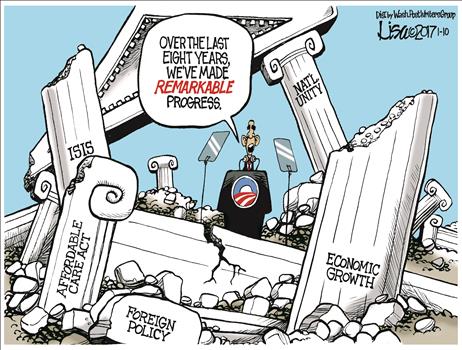 WASHINGTON, D.C. – U.S. Sens. Ted Cruz (R-Texas) and Lindsey Graham (R-S.C.) today introduced the Safeguard Israel Act, which will cut off funding to the United Nations until the President certifies to Congress that the United Nations Security Council (UNSC) Resolution 2334 has been repealed. The resolution passed last month undermines and delegitimizes our our ally, Israel. Click here to read more.

NYPD Officer Steven McDonald, left for dead by a teen gunman, never heard the prognosis of his imminent demise. The paralyzed cop miraculously survived for the next three decades, living to see the birth of his son and become a global voice for peace and forgiveness across an extraordinary and unexpected life. Click here to read more.

Check out the latest edition of Sandy Socks where she discusses Obama's farewell speech in Chicago!

I didn’t think I could be more favorably disposed toward Senator Jeff Sessions’s nomination as attorney general until I read today’s front-page New York Times profile, published in anticipation of tomorrow’s confirmation hearing. You get the impression the reporters themselves concluded that the left-wing racism smears are BS and just wrote a straight news piece on him. The long article is practically an ad for the #ConfirmSessions effort. Click here to read more.