DHS Secretary To Sen. Murray: Fighting Illegal Immigration Is Not A 'Philosophy,' It's The Law
Sen. Murray wanted to know if DHS was exploring alternative methods other than detention. Nielsen said that they utilize ankle bracelets, but added that if repeat offenders are turned over the marshals. That ends any option for alternative methods to detention. It’s when the DHS secretary reiterated that it’s illegal to enter the U.S. illegally that Murray got snippy.

Trump Announces the Capture of the Five 'Most Wanted' ISIS Terrorists
A jubilant President Trump tweeted on Thursday to announce that five of the 'Most Wanted leaders of ISIS' have been captured after they were lured from Syria to Iraq with fake Telegram messages.

Iran’s Economy May be Headed for a Death Spiral
Renewed sanctions on Iran could send its economy into a downward spiral. Over the past several weeks, Iran's rial has lost 25% of its value against the U.S. dollar, while inflation is hovering at around 8%. Unemployment is above 11% and citizens have taken to the streets to protest mismanagement and government corruption.

Trump Will Meet Kim Jong Un on June 12 in Singapore
Trump will be the first sitting U.S. president to meet with a leader of North Korea. "The highly anticipated meeting between Kim Jong Un and myself will take place in Singapore on June 12th," Trump tweeted. "We will both try to make it a very special moment for World Peace!"

Hamas Gaza Leader Hints at Mass Breach of Israel Border Fence
Hamas’ leader in the Gaza Strip Yahya Sinwar has compared the enclave’s people to a “starving tiger” hinting at the possibility that thousands of Palestinians could breach the border fence with Israel during mass protests next week.

President Trump made history by deciding to end the dangerous Iran Deal. Secure America Now's President, Allen Roth, spoke to Senator Ted Cruz and discussed why this is the right decision for America and our allies!

CLICK HERE to listen and find out why Senator Ted Cruz opposed Obama's deal since the very beginning! 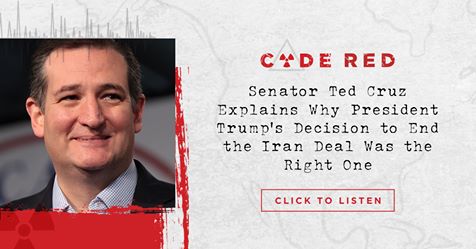