Illegal Immigration to America is Rising Again
DHS announced that Border Patrol agents apprehended 37,393 people in March, an increase of more than 200% on the previous year. The number of unaccompanied children caught entering illegally jumped by 300%, and the number of families detained while attempting the journey surged by nearly 700%.

National Guard Troops Have Already Begun Patrolling the U.S.-Mexico Border
National Guard troops have begun their deployment along the Southern border, marking a swift realization of President Donald Trump’s call for a boosted border presence until his long-promised border wall is constructed.

Israel and Iran Are Headed for a Collision in Syria
The routing of ISIS and the reestablishment of Bashar al-Assad's rule across much of the state of Syria is facilitating the expansion of Iran’s influence—indeed its de facto takeover—in much of the country. And with each passing day the sensation in Israel, of standing alone against the Iranian gambit to turn Syria into an Iranian forward base, grows more intense.

Iranians Panic - "Can't Find Dollars" After Government Enforces Currency Controls
The Iranian Rial crash to a record low 60,000 per US Dollar, having lost more than a third of its value in the last six months. This prompted an angry response from Iran’s First Vice President Eshaq Jahangiri who said in a statement that enemies of the Islamic Republic and of the government were behind the instability.

CIA Director, Mike Pompeo, at his confirmation hearing, makes it clear that he is committed to working with our allies but all in the context of what is good for America.

His goal is "to rally the world to the causes that benefit America!" What a breath of fresh air! 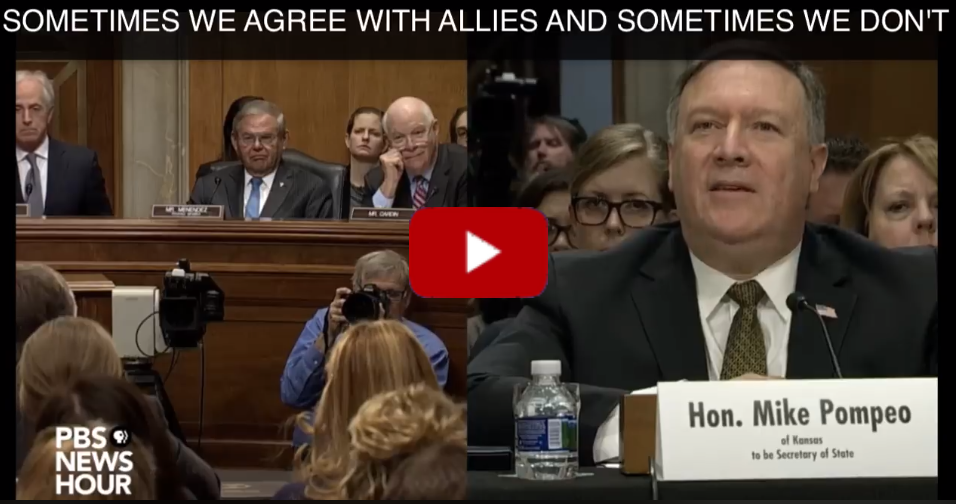