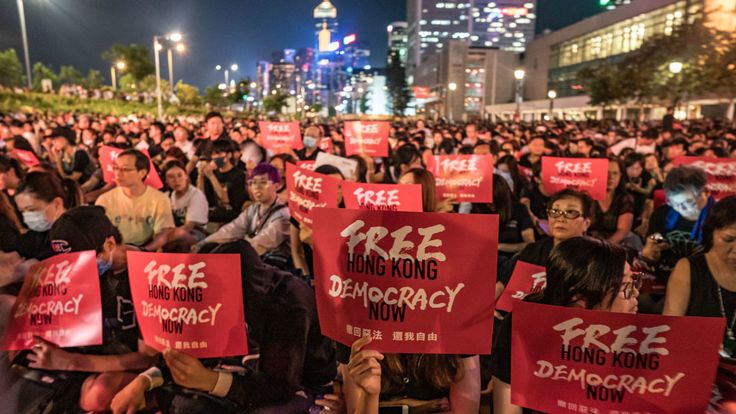 Carrie Lam, Hong Kong’s chief executive, said Wednesday that the government would withdraw a contentious extradition bill that ignited months of protests in the city, moving to quell the worst political crisis since the former British colony returned to Chinese control 22 years ago.

The move responds to a major demand of the protesters, who feared China would exploit the measure to extradite suspects for prosecution in China’s opaque judicial system. But it was unclear if the concession would be enough to bring an end to intensifying demonstrations, which are now driven by multiple grievances with the government.

“Incidents over these past two months have shocked and saddened Hong Kong people,” she said in an eight-minute televised statement broadcast shortly before 6 p.m. “We are all very anxious about Hong Kong, our home. We all hope to find a way out of the current impasse and unsettling times.”

Subscribe for original insights, commentary and discussions on the major news stories of the week, from columnists Max Fisher and Amanda Taub.

Her decision, which was met with skepticism by some pro-democracy figures in Hong Kong, comes as the protests near their three-month mark and show little sign of abating, roiling a city known for its orderliness and hurting its economy.

It also came as something of a surprise: Just a day before, China’s Hong Kong and Macau Affairs Office had signaled an uncompromising stance toward the protests. Yang Guang, a spokesman for the office, said at a briefing in Beijing that there could be “no middle ground, no hesitance and no dithering, when it comes to stopping the violence and controlling riots in Hong Kong.”

A possible hint of a change in Beijing’s stand, however, came from the country’s leader, Xi Jinping. In a speech on Tuesday to the Party School of the Communist Party’s Central Committee, Mr. Xi called on rising party officials to show resolve for a long struggle but suggested that the leadership could adjust its tactics to achieve its aims.

“On matters of principle, not an inch will be yielded,” Mr. Xi said, “but on matters of tactics there can be flexibility.”

Jean-Pierre Cabestan, a professor at Hong Kong Baptist University and the author of “China Tomorrow: Democracy or Dictatorship?” suggested on Wednesday evening that Beijing had asked Mrs. Lam to make the decision as a tactical calculation ahead of the Oct. 1 anniversary of the establishment of the People’s Republic of China.

The aim, he said, was “to calm down the movement’s moderates” and “weaken and isolate the radicals.”

“Maybe it is a good calculation on the part of Beijing,” he added, “but it may also fail.”