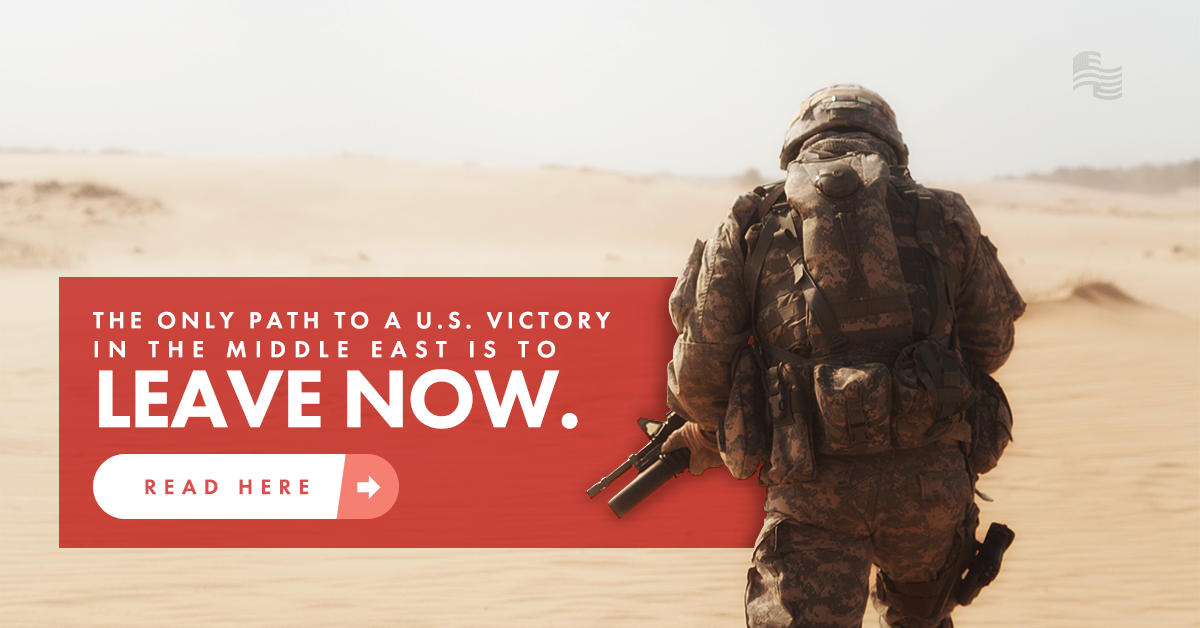 
The Only Path to a U.S. Victory in the Middle East Is to Leave Now


It is still possible to achieve bipartisan consensus in Congress. Just vote to oppose Trump and prolong lost wars.

Senate Majority Leader Mitch McConnell showed how it’s done late last month with an amendment rebuking the president’s plan to withdraw U.S. troops from Afghanistan and Syria passed by a wide 70-26 majority. Even that endorsement of the status quo was only a symbolic measure since a second-order amendment stipulated that McConnell’s could not be interpreted as legally authorizing military force in those conflicts.

But symbolizing what? An appetite for never-ending war? That there is no cost to opposing Trump even when a vast majority of the American public, Democratic and Republican, want out of the Middle East? The answer is a little bit of both—which is to say, it symbolizes the fact that U.S. foreign policy has become unmoored from American reality.

All the Senate Democrats who have declared their candidacy for president voted no, as did four Republicans, Ted Cruz, Rand Paul, Mike Lee, and John Kennedy.

“Great nations do not fight endless wars,” Trump said in his State of the Union address. On those terms, how does a nearly 18-year-long war in Afghanistan represent leadership?

A day after the vote, Cruz delivered a speech at the American Enterprise Institute, where he outlined his rationale for supporting Trump’s withdrawal. He described a strategy somewhere between interventionism and isolationism, based on the idea that America should “be extremely reluctant to intervene militarily and risk the lives of our sons and daughters.”

Cruz traces his strategy back to the founders and takes as its motto “Don’t Tread on Me”—leave us alone and we’ll leave you alone. There are signs as well of more contemporary influences, like the “Tea Party Foreign Policy” articulated in 2015 by conservative intellectual Angelo Codevilla, which bears notable similarities to Cruz’s proposals.

Cruz’s opponents represent a clear majority in the Senate and broader national security establishment. They say that if we don’t stick it out, our enemies will say we cut and run. Further, a U.S. withdrawal from the region will be seen as an abdication of global leadership. American Exceptionalism, the notion that we have a special mission in the world, will run aground. What is remarkable about this position is how reality-resistant it is. If we worry that leaving will embolden our enemies, perhaps it’s worth asking what effect staying has had when after nearly two decades of war the Taliban still controls or contests more than half of Afghanistan.

“Great nations do not fight endless wars,” Trump said in his State of the Union address. On those terms, how does a nearly 18-year-long war in Afghanistan represent leadership?