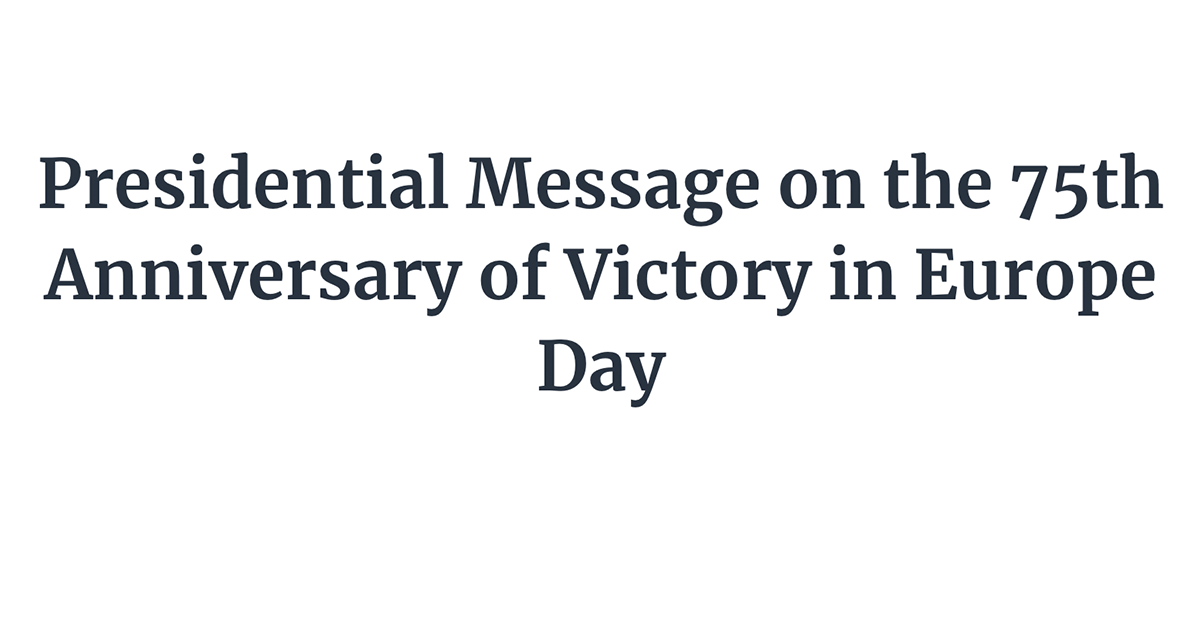 
Presidential Message on the 75th Anniversary of Victory in Europe Day

Seventy-five years ago today, the last remnants of the Nazi regime unconditionally surrendered to the Allied Powers, marking the end of World War II in Europe.  Today, we celebrate the forces of freedom who defeated tyranny and emerged victorious in that monumental struggle.  We pay tribute to those who served for their service and pause to remember those who gave their last full measure in defense of the flames of liberty.

The campaign to end fascism in the European Theater is a somber reminder of the price of freedom.  More than 30 million lives were lost and tens of millions more were shattered in the war.  Most of those who perished in Europe were civilians, including 6 million Jews and millions of others from Poland and the former Soviet Union.  The United States also suffered incredible losses.  Of the more than 2 million Americans who deployed to Europe and the Mediterranean or patrolled the Atlantic Ocean, more than 186,000 paid the ultimate sacrifice, and more than twice that number were wounded.

Most of these selfless and heroic warriors had never known life in a prosperous America.  They grew up during the Great Depression, when America’s economic prospects seemed bleak.  Yet, they answered our country’s call of duty because they believed in the principles that lie at the foundation of our Nation.  They came from the plains of the Midwest, industrial and manufacturing towns, the sprawling farmlands of rural America, and our country’s up-and-coming cities.  Many had never traveled outside of their home states, but they would trek thousands of miles around the world to meet their tyrannical enemies on the beaches of France, in the forests of Belgium, on the hills of Italy, and on hundreds of other battlefields of Europe and North Africa.  These American heroes would not relent in their noble efforts until they had liberated all of Europe from the abhorrent Nazi regime.