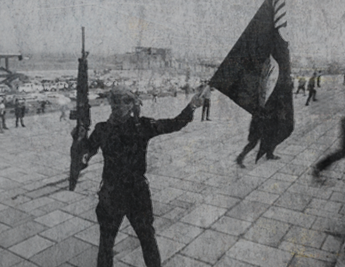 
Potential Terrorists Buy Honduran Passports to Make Their Way to the U.S.

As a result, these foreigners can then acquire Honduran passports, which can be used to apply for visas to enter

On Sunday, La Prensa, a Honduran newspaper, revealed the illicit sales of Honduran identity documents to Palestinian and Syrian citizens. La Prensa's investigation was anchored on the case of a Palestinian, Kareen Samer Abdulhadi.

In October 2014, Abdulhadi presented himself to the Honduran consulate in Barcelona and with official documentation from the RNP and solicited a Honduran passport—arguing his status of "Honduran by birth." Nevertheless, the language, his marked Arab features, and inconsistent birth data aroused the suspicions of the diplomatic staff about his true nationality and the legitimacy of the documents (including a birth certificate and identification card).

Further investigation by consular staff revealed that in 2013 there had been an unauthorized intrusion and alteration in the database of birth registrations of one of the municipal records back in Honduras, which allowed the Palestinian to be documented as Honduran.

According to information accessed by La Prensa, Kareen Samer's father acquired his own Honduran identity card and birth certificate, and with those documents was able to also register at least eight family members, including his children, wife, and grandchildren.

Subsequent investigations established that Abdulhadi's case is only the tip of the iceberg of an organized crime network with international ties to smugglers and RNP officials, who were able to illegally register at least one hundred Palestinians and Syrians with fraudulent documentation.

The smuggling network operates by falsifying birth certificates on Hondurans who have not gotten their identity card or people now deceased. Additionally, information obtained by La Prensa showed that the network operated from inland municipal registries where there is not much registration activity; there, the network established their internal contacts and brought data from their foreign customers to process documentation (identity cards and birth certificates) that would allow them to obtain a Honduran document and then a United States visa.

An official source who spoke on condition of anonymity said, "I understand that it is a network that operates from outside Honduras and that referred clients to certain parts of the country, they have people who know and have access to the system, as employees of the Registry have an assigned username to be able to modify part of the database."

The pattern of operation, as laid out by La Prensa, is as follows:

Contact: The foreigner contacted the smuggler who transacted the Honduran identity card that would allow [the foreigner] to go to the US Embassy to apply for an entry visit to the United States, and [the smuggler] would contact an RNP official to get the identity.

Alteration: The RNP official managed with his contact in the municipal registry of Siguatepeque to alter the data of a living or deceased person, whose family had not submitted the death certificate so that their ID number would be assigned.

Changes: The employee used his access key to the system and opened the database, taking the profile of the person or another that had never gotten an ID; they changed the name and printed the birth certificate with the number of the identity.

Process: With the illicit certificate in hand, the client or the smuggler went to another municipal registry, in this case Comayagua, and there processed his ID. Then [he] went to the Honduran embassies or Migración to apply for a Honduran passport.
The investigations suggest that the registration of Arabs is the first case of mass documentation in which this pattern was followed and there's a specific geographical area where the illegal procedures were performed. A source said that there are other documented cases (but not to the scale of the Arab cases) where people from Colombia and Cameroon were fraudulently registered in the Atlantic zone of the country and later solicited their ID card at other registries in the same jurisdiction, or a different one, to not leave a trace.