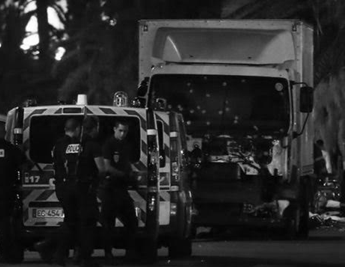 
Terrorist Attack in Nice: What We Know

The driver, who had been seen driving erratically prior to the crash, mounted a curb and proceeded to drive for over a mile along the Promenade des Anglais, the main street in Nice. He deliberately mowed down pedestrians who had gathered to enjoy the city's Air Force display and fireworks show. Multiple witnesses confirmed that the truck swerved multiple times in an attempt to hit more civilians.

Police managed to bring the truck to a stop close to a luxury hotel, where the driver opened fire on the police and surrounding people. The police then surrounded the truck and killed the driver.

The driver has been identified as Mohamed Lahouaiej Bouhlel, a 31 year old man of Franco-Tunisian descent. Police have not yet confirmed any further details, but are searching his flat, located near the Nice train station.

Bouhlel was said to have rented the truck from a rental company in a neighboring town two days prior to the attack.

Fake guns and grenades were found inside the truck directly after the conclusion of the attack. The attacker was, however, armed with a pistol. Initially, local authorities weren't sure if this was an independent attack.

The victims include residents of Nice, as well as tourists from multiple countries including the United States. The two Americans who were killed as a result of the terror attack were 11-year-old Brodie Copeland and his father, Sean Copeland of Austin, Texas.

President Hollande said that 50 people who were injured in the attack were "between life and death.” Nice's children's hospital reported that it has treated over 50 children and adolescents in relation to the attack.

Close to 30,000 people were on the Promenade des Anglais during the attack.

This attacks follows a call by ISIS’s main spokesman Abu Muhammad al-Adnani to ISIS followers to do exactly what this attacker did. Many believe that the rising number of attacks in the recent months are due to major losses in ISIS controlled territories in both Syria and Iraq, following an increase in U.S. and French airstrikes.

As a result, France has become the number one target of radical Islamic terror for ISIS and its supporters, despite the state of emergency put in place after the November attacks in Paris which killed 130 people. The state of emergency was extended three months in response to yesterday's attack.

An organized terrorist group has yet to take responsibility for the attack, but both Al-Qaeda and ISIS have shown their support of the rampage.

Bouhlel had a history of petty crimes that included burglary and theft, but was, "totally unknown to the intelligence services, both locally and nationally, " as he hadn't been included in any terrorism-related database.