In 2014, Suleiman also made a comment on social media alluding to the antisemitic idea that Israel controls American foreign policy, claiming that it is the "51st state."

Popular American Imam Omar Suleiman, known for his Israel-bashing antics, gave the Ramadan invocation at the opening of Thursday’s House of Representatives session. 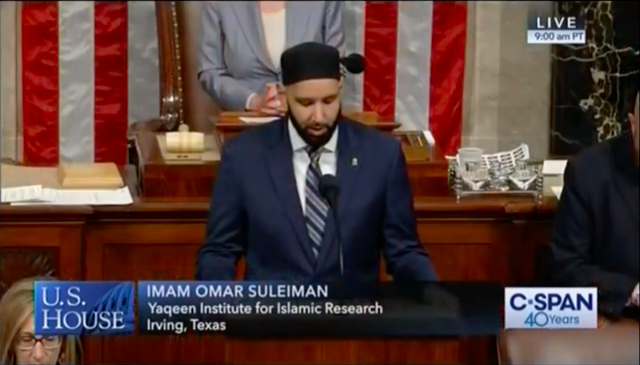 Suleiman is the founder and president of the Irving, Texas-based Yaqeen Institute for Islamic Research. He was invited to give Thursday's invocation by US Rep. Eddie Bernice Johnson (D-Texas), a Yaqeen Institute statement said.

“We pray for peace, not war," he said. "Love not hate. Benevolence, not greed. Unity, not division. And we commit ourselves to not betraying our prayers with actions that contradict them. Let us be for truth, no matter who, or for is against it."

Suleiman has made several vehemently anti-Israel comments and also seemed to side with Hamas in an August 2014 Facebook post.

As the 2014 Gaza War broke out, Suleiman said on social media: “How befitting that the 3rd Intifada starts on the 27th night of Ramadan as worshippers are denied prayer in Masjid Al Aqsa.” He ended his post with a prayer of sorts: “God willing on this blessed night as the 3rd Intifada begins, the beginning of the end of Zionism is here. May Allah help us overcome this monster, protect the innocent of the world, and accept the murdered as martyrs. ameen.”