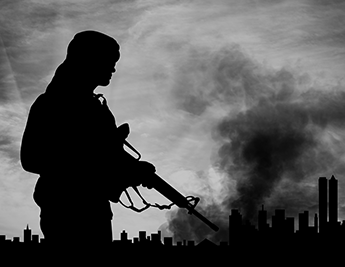 The Islamic State (ISIS/ISIL), in a new propaganda message, is urging supporters to carry out violent attacks against civilian and military targets within the United States and Europe during the Muslim holy month of Ramadan, which begins in early June.

“Ramadan, the month of conquest and jihad. Get prepared, be ready … to make it a month of calamity everywhere for the non-believers … especially for the fighters and supporters of the Caliphate in Europe and America,” said the audio message, urging ISIS sympathizers in the West to attack if they cannot travel to the group’s self-declared Caliphate in Syria and Iraq, Reuters reports.

“The smallest action you do in their heartland is better and more enduring to us than what you would if you were with us. If one of you hoped to reach the Islamic State, we wish we were in your place to punish the Crusaders day and night,” the message reportedly added.

ISIS encouraged its supporters to launch lone wolf attacks “to win the great award of martyrdom.”

The authenticity of the 31-minute message, purporting to come from Abu Muhammad al-Adnani, an ISIS spokesman, and posted on Twitter over the weekend by alleged supporters and opponents of the group alike, could not be verified, notes Reuters.

According to the International Business Times (IBTimes), the message was officially released on May 21 by al-Furqan, identified as the jihadist group’s media arm.

During the month of Ramadan, Islam adherents abstain from eating, drinking, smoking, having sex, and other physical needs each day, starting from before the break of dawn until sunset.

The day that marks the birth of the United States, the 4th of July, will fall on Ramadan. In addition, the holy month will take place during the summer, the season for multiple music festivals and concerts across the nation.

Various presidential campaign and election events will also take place during Ramadan 2016, as June will mark the end of the contentious primaries and caucuses held by the states and parties during which ISIS and Islam were debated.

“The period of Ramadan, which carries on into July, happens to coincide with a number of big events in Europe,” including the Euro Soccer Cup, Wimbledon, the Glastonbury Festival, and the London Gay Pride Parade, notes IBTimes.

In June 2015, as ISIS commemorated the first anniversary of the establishment of its Caliphate, the jihadist group made similar “Ramadan calls for violence,” also via an audio message by its spokesman al-Adnani.

In part, the decline has been attributed to ISIS’ recent focus on encouraging its supporters to carry out lone wolf attacks in their homeland.