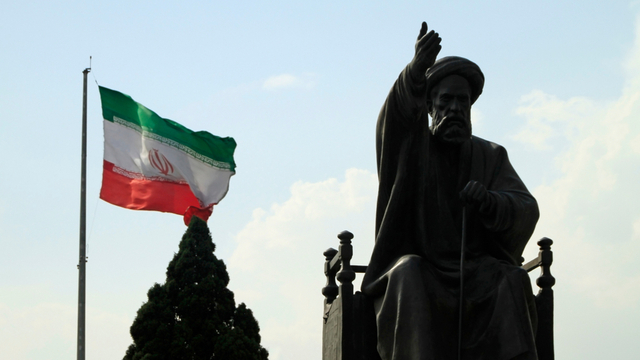 
Iran and America Are Suddenly Both Naked

It’s no coincidence that in the wake of the targeted killing of Quds Force commander Qassem Soleimani, Iran’s most important military proxy has begun taking credit for terror attacks committed nearly four decades ago. For example, Hezbollah-affiliated media and activists  are laying public claim to the organization’s responsibility for bombing of the U.S. Marine barracks in October 1983, which killed 241 Marines. So why now?

The answer is, to scare Americans now that Donald Trump has thrown the regime in Tehran off balance by changing the 40-year-old rules of the game. The United States always knew that Hezbollah was responsible for the Marine barracks attack and that the Lebanese militia was armed, trained, funded and directed by Iran. President Reagan’s decision not to respond directly to the attack was part of a tacit agreement that America and the Islamic Republic entered into during the 1979 U.S. Embassy takeover in Tehran. It mirrored similar arrangements with the Soviet Union in which neither superpower held the other directly accountable for the actions of proxies in order to reduce the likelihood of a nuclear cataclysm.

Yet, unlike the Soviet Union, the Islamic Republic was hardly a globe-spanning nuclear superpower. It was merely a hostile local power that threatened the American regional security order through terror attacks. Washington’s response was to look away, under the theory that it was beneficial to the larger order to pretend, in public, that rules still existed. In turn, Iran was happy to play make-believe and accumulate prestige and leverage.

The terms of this weird deal held fast for the next four decades, through the end of the Cold War, the collapse of the Soviet Union, the First and Second Gulf Wars, Bush’s occupation of Iraq, Obama’s Iran deal, and other local and global milestones. Washington wouldn’t hold the clerical regime accountable for the violent proxies that it funded, armed, trained, and directed. In exchange, Iran and its partners would refrain from embarrassing the Americans by boasting about the murders they committed. The founder of the Islamic Republic, Ayatollah Ruholla Khomeini, famously said that America couldn’t do a damn thing. It is more accurate to say our elected officials wouldn’t do a damn thing.

Donald Trump put an end to that arrangement by commingling the dust of Soleimani together with that of one of his chief Arab lieutenants, Abu Mahdi al-Muhandis, head of one of Iran’s Iraqi terror proxies. Now that Trump is holding Iran accountable for the actions its proxies take in its name, the leverage gained by helping America play make-believe is gone. Iran and its allies now feel liberated to bathe publicly in the blood of Americans and warn that more violence is coming their way.

The problem for Iran is that it isn’t actually all that powerful. For all the concern over retaliation, Trump’s trashing of the old rulebook has stripped Iran of the most important instruments in its arsenal—“plausible deniability.”

Iran’s ability to respond to the U.S. was already limited by the fact that its conventional military forces are old and rusting away. Yes, IRGC speedboats can harass, and target, the U.S. Navy in the Persian Gulf. But it can’t move large land forces into Iraq, never mind drop them into Florida or Alaska.

A good measure of Iran’s military weakness is that Qassem Soleimani was commander not of its regular army but rather the Quds Force, the expeditionary unit of Iran’s parallel military structure, the Islamic Revolutionary Guards Corps (IRGC). The Quds Force is relatively small, with estimates ranging from 3,000 to 15,000 fighters–i.e., a force the size of Hezbollah. For protracted campaigns like the Syria war, the Quds Force relies on what Israeli analyst Shimon Shapira calls the Shiite International—paid militias drawn from Middle East and Central Asian countries with Shiite populations, like Lebanon, Iraq, Syria and Afghanistan.

The threat that Iran poses to a superpower America is “asymmetric”—kidnappings, embassy attacks, hijackings, bombings, etc., typically conducted by Iranian proxies. The military experts and political scientists who coined the term usually fail to note that the ability to wage “asymmetric” warfare is wholly dependent on an adversary’s willed blindness. If Iran’s targets decide to unsubscribe to the fiction that the Islamic Republic is not directly responsible for the actions of its proxies, Iran is rendered virtually powerless–with terror attacks being met with direct military hits on Iranian bases, airfields, ports, power plants, dams, and other infrastructure.

It is only because Americans and other Western powers have declined to call out Iran and have instead appeased it, that an obscurantist regime whose major exports are energy, pistachios—and terror, of course—appears like a formidable adversary.

In making Iran accountable, Trump has knocked Iran down to its natural size—and likely made Americans safer from Iranian aggression than they have in fact been at any point in the last 40 years, during which Iranian proxies have repeatedly killed large numbers of Americans. Killing Soleimani is a much more important operation than those targeting ISIS leader al-Baghdadi and even bin Laden, since it will likely shape the future actions of a state, not the leadership rotation of terror groups.

Iranian-backed terror isn’t a stubborn, unchanging fact of the international landscape, except to the degree that we made it so. The policy of appeasement that began in 1979, with the embassy takeover, culminated in the 2015 Joint Comprehensive Plan of Action (JCPOA) when the Obama administration flooded Soleimani’s war chests with hundreds of billions of dollars and legitimized Iran’s “right” to a large-scale nuclear weapons program. In line with the decadeslong U.S. policy of augmenting the Iranian threat in order to avoid taking action against it, Obama said the only alternative to giving Iran the bomb was war.

Donald Trump was vilified when he exited the Iran deal in May. But in the eyes of the foreign policy establishment, he committed an even graver sin by exposing the 40-year-old lie that U.S. policymakers, right and left, had cultivated to rationalize their collective unwillingness to protect Americans from Iranian terror.

So why did U.S. officials treat Iran differently than any other country, even at the expense of thousands of American lives? There is the U.S. investment in maintaining the appearance of a rules-based order led by America, of course. On a deeper, less strategic level, there was the guilt and self-pity of America’s ruling elites, and the habits of magical thinking that resulted.

Power makes people vain. When it is handed down to them, it often makes them resentful, too. In 1979, when Iranian students took over the U.S. Embassy in Tehran, the Western intelligentsia saw it as the righteous revenge of the wretched of the earth—and confirmation of their own political exertions spent on college campuses from Berkeley to Paris the previous decade. The Iranian revolution was evidence to our ruling class of how much their fathers had gotten wrong—and thus proof of their own virtue.

It required no national security acumen or regional expertise to see that the “students” were a ruse. Khomeini was clearly in charge—he was, after all, the supreme leader. No one seized the U.S. Embassy, kidnapped 52 Americans in the center of Tehran, and held them for over a year, without his approval.

The hostage crisis showed the regime in Tehran that so long as it didn’t pierce the veil and take direct, unmistakable, on-the-record responsibility for its actions, Washington would stick with the cover story. And even though the hostage crisis crippled Jimmy Carter, it was his successor, Ronald Reagan, who not only failed to retaliate after the hostages were freed, but then also granted the Iranians impunity when under cover of Hezbollah, they bombed the U.S. Embassy in Lebanon in April 1983. Six months later, they bombed the Marine barracks. In December of that year, the Iranians employed Lebanese and Iraqi proxies to bomb the U.S. Embassy in Kuwait. Muhandis, killed last week with Soleimani, is believed to have planned the attack.

To free the Iranian proxies apprehended by Kuwaiti authorities, Hezbollah embarked on an almost decadelong campaign of assassinations and kidnappings, taking dozens of Americans hostage in Beirut, including the president of the American University in Beirut, David Dodge, who was transferred for a time to Tehran’s infamous Evin prison. Hezbollah then assassinated Dodge’s AUB colleague Malcolm Kerr.

U.S. officials even had scholarly support to rationalize their failure to hold Iran accountable. During the 1990s, Middle East experts promoted a thesis holding that the clerical regime in fact had little to do with Hezbollah. According to the “Lebanonization” thesis, Hezbollah was a homegrown resistance movement that came into being as a local response to Israel’s 1982 occupation of Lebanon. In fact, as Tablet colleague Tony Badran has written, Hezbollah was seeded in Lebanon in the mid-’70s by “Iranian revolutionary factions opposed to the shah.” U.S. policymakers preferred the fiction that Hezbollah was a homegrown product because it supported both their emotional needs and their policy goals: The West had earned the righteous anger of the natives, and there was nothing to be done except atone by way of offering human sacrifices.

In 1996, Iran’s proxy in Saudi Arabia, Hezbollah al-Hijaz, bombed the Khobar Towers, killing 19 U.S. Air Force personnel. The Clinton administration’s hopes for rapprochement with Tehran under the leadership of so-called reformist President Mohammad Khatami required the U.S. to pretend Iran was not responsible.

Between 2003 and 2011, according to a State Department assessment, Iran and its Shiite allies were responsible for killing more than 600 U.S. servicemen in Iraq. The body count doesn’t include the U.S. servicemen killed by the Sunni fighters ushered from Damascus international airport to the Iraqi border by Bashar Assad’s regime in Syria, Iran’s chief Arab ally. Yet George W. Bush reportedly passed up opportunities to kill Soleimani, deciding against opening a third front against Iranian terrorists that might endanger his doomed “Freedom Agenda.”

By taking decisive action against Soleimani, Trump showed that Iran’s power is an illusion generated by D.C.’s willingness to look the other way

There was even less of a chance Obama would kill Soleimani, though his administration reportedly had him in the crosshairs, too. Soleimani was the key to the JCPOA, Obama’s crowning foreign policy achievement. He admired Soleimani, a hard man who got things done. Rather than stop the Quds Force commander, Obama told Arab allies that “they need to take a page out of the playbook of the Quds Force.”

The former president’s conviction was simply the result of what American officials had been saying since 1979. Therefore, Obama counted on Soleimani’s ability to control the ground in Syria and help America stabilize the region. Yet only weeks after Obama diplomats and Iran agreed to the JCPOA in July 2015, Soleimani was in Moscow petitioning Vladimir Putin for assistance in Syria. In spite of the billions of dollars in sanctions relief that Obama had granted Iran, and the $1.7 billion in cash the U.S. shipped directly to the IRGC, the Quds Force and the Shiite international were on the verge of losing the war to rebels in pick-up trucks.

Six U.S. administrations were complicit in turning Iran into a regional power. In that context, the Obama administration’s decision to flood Iranian war chests with cash and recognize its right to build a nuclear bomb was the logical culmination of the rot eating away at the Beltway for four decades. It was perhaps to be expected that an outsider who often doesn’t know when to keep quiet, and can’t stay off Twitter, would be the one to sing out like the boy in the fairy tale. It’s true, the emperor has no clothes. The rules have changed but that doesn’t mean the Iranians won’t be looking for revenge.