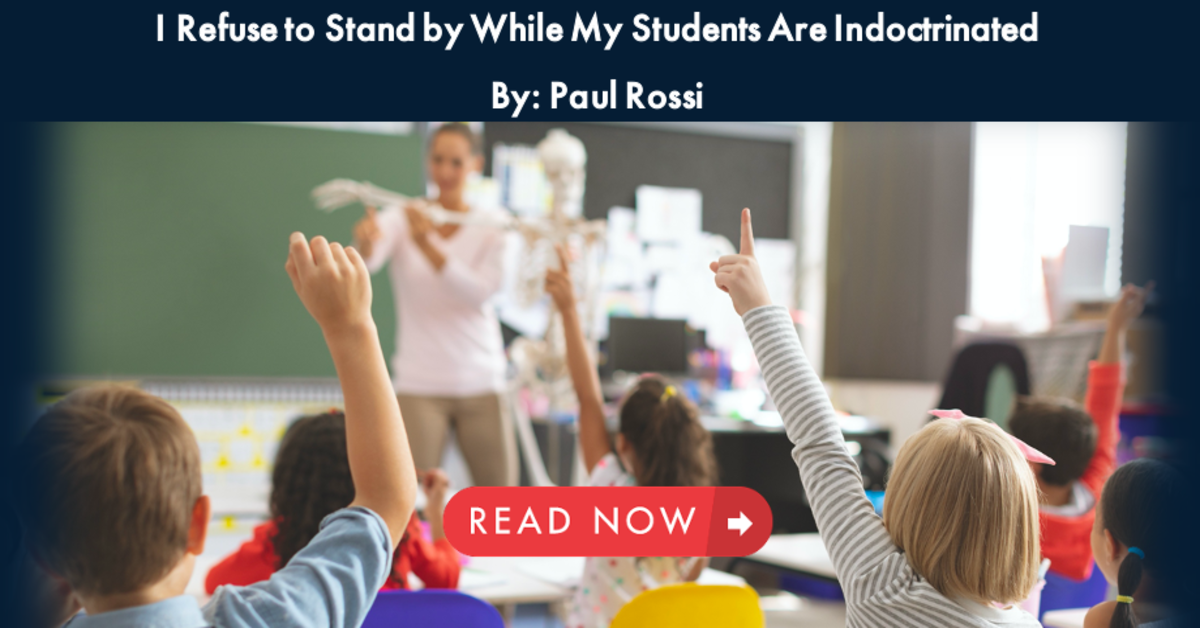 
I Refuse to Stand By While My Students Are Indoctrinated

I am a teacher at Grace Church High School in Manhattan. Ten years ago, I changed careers when I discovered how rewarding it is to help young people explore the truth and beauty of mathematics. I love my work.

As a teacher, my first obligation is to my students. But right now, my school is asking me to embrace “antiracism” training and pedagogy that I believe is deeply harmful to them and to any person who seeks to nurture the virtues of curiosity, empathy and understanding.

“Antiracist” training sounds righteous, but it is the opposite of truth in advertising. It requires teachers like myself to treat students differently on the basis of race. Furthermore, in order to maintain a united front for our students, teachers at Grace are directed to confine our doubts about this pedagogical framework to conversations with an in-house “Office of Community Engagement” for whom every significant objection leads to a foregone conclusion. Any doubting students are likewise “challenged” to reframe their views to conform to this orthodoxy.

I know that by attaching my name to this I’m risking not only my current job but my career as an educator, since most schools, both public and private, are now captive to this backward ideology. But witnessing the harmful impact it has on children, I can’t stay silent.

My school, like so many others, induces students via shame and sophistry to identify primarily with their race before their individual identities are fully formed. Students are pressured to conform their opinions to those broadly associated with their race and gender and to minimize or dismiss individual experiences that don’t match those assumptions. The morally compromised status of “oppressor” is assigned to one group of students based on their immutable characteristics. In the meantime, dependency, resentment and moral superiority are cultivated in students considered “oppressed.”

All of this is done in the name of “equity,” but it is the opposite of fair. In reality, all of this reinforces the worst impulses we have as human beings: our tendency toward tribalism and sectarianism that a truly liberal education is meant to transcend.

Recently, I raised questions about this ideology at a mandatory, whites-only student and faculty Zoom meeting. (Such racially segregated sessions are now commonplace at my school.) It was a bait-and-switch “self-care” seminar that labelled “objectivity,” “individualism,” “fear of open conflict,” and even “a right to comfort” as characteristics of white supremacy. I doubted that these human attributes — many of them virtues reframed as vices — should be racialized in this way. In the Zoom chat, I also questioned whether one must define oneself in terms of a racial identity at all. My goal was to model for students that they should feel safe to question ideological assertions if they felt moved to do so.

It seemed like my questions broke the ice. Students and even a few teachers offered a broad range of questions and observations. Many students said it was a more productive and substantive discussion than they expected.

However, when my questions were shared outside this forum, violating the school norm of confidentiality, I was informed by the head of the high school that my philosophical challenges had caused “harm” to students, given that these topics were “life and death matters, about people’s flesh and blood and bone.” I was reprimanded for “acting like an independent agent of a set of principles or ideas or beliefs.” And I was told that by doing so, I failed to serve the “greater good and the higher truth.”

He further informed me that I had created “dissonance for vulnerable and unformed thinkers” and “neurological disturbance in students’ beings and systems.” The school’s director of studies added that my remarks could even constitute harassment.

A few days later, the head of school ordered all high school advisors to read a public reprimand of my conduct out loud to every student in the school. It was a surreal experience, walking the halls alone and hearing the words emitting from each classroom: “Events from last week compel us to underscore some aspects of our mission and share some thoughts about our community,” the statement began. “At independent schools, with their history of predominantly white populations, racism colludes with other forms of bias (sexism, classism, ableism and so much more) to undermine our stated ideals, and we must work hard to undo this history.”

Students from low-income families experience culture shock at our school. Racist incidents happen. And bias can influence relationships. All true. But addressing such problems with a call to “undo history” lacks any kind of limiting principle and pairs any allegation of bigotry with a priori guilt. My own contract for next year requires me to “participate in restorative practices designed by the Office of Community Engagement” in order to “heal my relationship with the students of color and other students in my classes.” The details of these practices remain unspecified until I agree to sign.

I asked my uncomfortable questions in the “self-care” meeting because I felt a duty to my students. I wanted to be a voice for the many students of different backgrounds who have approached me over the course of the past several years to express their frustration with indoctrination at our school, but are afraid to speak up.

They report that, in their classes and other discussions, they must never challenge any of the premises of our “antiracist” teachings, which are deeply informed by Critical Race Theory. These concerns are confirmed for me when I attend grade-level and all-school meetings about race or gender issues. There, I witness student after student sticking to a narrow script of acceptable responses. Teachers praise insights when they articulate the existing framework or expand it to apply to novel domains. Meantime, it is common for teachers to exhort students who remain silent that “we really need to hear from you.”

But what does speaking up mean in a context in which white students are asked to interrogate their “white saviorism,” but also “not make their antiracist practice about them”? We are compelling them to tiptoe through a minefield of double-binds. According to the school’s own standard for discursive violence, this constitutes abuse.

Every student at the school must also sign a “Student Life Agreement,” which requires them to aver that “the world as we understand it can be hard and extremely biased,” that they commit to “recognize and acknowledge their biases when we come to school, and interrupt those biases,” and accept that they will be “held accountable should they fall short of the agreement.” A recent faculty email chain received enthusiastic support for recommending that we “‘officially’ flag students” who appear “resistant” to the “culture we are trying to establish.”

When I questioned what form this resistance takes, examples presented by a colleague included “persisting with a colorblind ideology,” “suggesting that we treat everyone with respect,” “a belief in meritocracy,” and “just silence.” In a special assembly in February 2019, our head of school said that the impact of words and images perceived as racist — regardless of intent — is akin to “using a gun or a knife to kill or injure someone.”

Imagine being a young person in this environment. Would you risk voicing your doubts, especially if you had never heard a single teacher question it?

Last fall, juniors and seniors in my Art of Persuasion class expressed dismay with the “Grace bubble” and sought to engage with a wider range of political viewpoints. Since the BLM protests often came up in our discussions, I thought of assigning Glenn Loury, a Brown University professor and public intellectual whose writings express a nuanced, center-right position on racial issues in America. Unfortunately, my administration put the kibosh on my proposal.

The head of school responded to me that “people like Loury’s lived experience—and therefore his derived social philosophy” made him an exception to the rule that black thinkers acknowledge structural racism as the paramount impediment in society. He added that “the moment we are in institutionally and culturally, does not lend itself to dispassionate discussion and debate,” and discussing Loury’s ideas would “only confuse and/or enflame students, both those in the class and others that hear about it outside of the class.” He preferred I assign “mainstream white conservatives,” effectively denying black students the opportunity to hear from a black professor who holds views that diverge from the orthodoxy pushed on them.

I find it self-evidently racist to filter the dissemination of an idea based on the race of the person who espouses it. I find the claim that exposing 11th and 12th graders to diverse views on an important societal issue will only “confuse” them to be characteristic of a fundamentalist religion, not an educational philosophy.

One current student paid me a visit a few weeks ago. He tapped faintly on my office door, anxiously looking both ways before entering. He said he had come to offer me words of support for speaking up at the meeting.

I thanked him for his comments, but asked him why he seemed so nervous. He told me he was worried that a particular teacher might notice this visit and “it would mean that I would get in trouble.” He reported to me that this teacher once gave him a lengthy “talking to” for voicing a conservative opinion in class. He then remembered with a sigh of relief that this teacher was absent that day. I looked him in the eyes. I told him he was a brave young man for coming to see me, and that he should be proud of that.

Then I sent him on his way. And I resolved to write this piece.