One of the Best and the Brightest. We few, we proud, we band of brothers. First Lieutenant Fred Omar Pratt was born 17 August 1941. He was the son of Vern Hose Pratt and Edwin M. Pratt of Moorefield, WV. 1LT Pratt enlisted in the Army on 13 October 1958 and served a tour of duty in Japan and Korea. He was a distinguished graduate of the Airborne School and served as a Ranger in the 101st Airborne Division in Vietnam during 1962, where he volunteered for the Special Forces and returned to the U.S. for training. After winning the Green Beret, he was appointed to attend Officer Candidate School at Fort Benning, GA where he was elected to the honored position of Council of President of the Battalion and was named distinguished graduate of his class. Lt. Pratt then attended the Army's Rotary Wing Flight School and returned to Vietnam on 02 June 1968 as a C-Model Helicopter Gun Ship Pilot in the 155th Assault Helicopter Company, Ban Me Thuot, Central Highlands, RVN. On 23 August 1968, !Lt. Pratt distinguished himself by exceptionally valorous actions while serving as pilot of a Huey helicopter gunship supporting friendly Special Forces and MACV compounds in the vicinity of Duc Lop that were under attack by an enemy regiment. Observing a treeline in which large enemy forces had concentrated, he began to attack the enemy force; in the course of which his aircraft sustained numerous hits. Undaunted, he continued his fierce attacks until his aircraft was shot down by the intense anti-aircraft fire. Although wounded in the arm and back, !Lt. Pratt survived the crash. The crew of the downed aircraft was immediately taken under fire by enemy mortars and automatic weapons fire. However, his concern was for his seriously injured crew chief. Gaining access to the outer perimeter of the compound, he again exposed himself to enemy fire to summon aid for his crew. Upon reaching the secure area, he continued to give aid to his wounded crew chief, refusing treatment for himself. On 26 August 1968, although he had been shot down and wounded only days before, he insisted on returning to the battle (the NVA had captured half the compound by this time). Arriving in the area, he began an attack on a large enemy force, from which he drew heavy fire. He responded by immediately placing a devastating volume of fire on the enemy position. During this one engagement alone he is credited with killing over 600 NVA. During the fierce exchange of fire, heavy enemy fire shattered his windshield and he was fatally wounded in the face. His copilot returned the shot up gunship to the 155th AHC field at Ban Me Thuot. For his courageous, gallant and aggressive action, 1Lt. Pratt was awarded the Silver Star for gallantry in action (Posthumous), the Distinguished Flying Cross for heroism (Posthumous), the Air Medal with Seven Oak Leaf Clusters, the Purple Heart twice, National Defense Service Medal, Vietnam Service Medal, Republic of Vietnam Campaign Medal, and two of the highest awards awarded by the Republic of Vietnam. In June 1974, the U.S. Army dedicated the new Flight Simulator Building, Building 4901, at the U.S. Army Aviation School at Fort Rucker Alabama as Pratt Hall in honor of Omar. It houses the most sophisticated flight simulator systems used to train Army aviators. His Niece, Joye, stated: "My Uncle, Omar, left behind a wife and three young sons. He was born in a small town called Moorefield, West Virginia where the rest of his brothers and sisters now reside." I was proud to have served with 1Lt. Pratt in the 155th AHC, may he rest in peace and always be remembered by his fellow warriors. Bradley H. Petersen, Jr. Col. USA (Ret.) 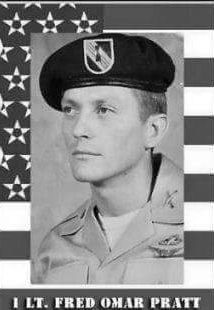 Thank you to Heidi Pratt for submitting Fred Pratt to be featured in Secure America Now’s veteran recognition program: Home of the Free - Because of the Brave.

Thank you, Fred, for your service.

Click here to submit your own veteran to be featured!