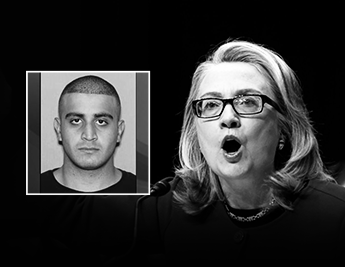 Now, Haney tells WND that the mosque where Orlando killer Omar Mir Siddique Mateen worshiped several times a week also has a tie to that case.

He noted that the FBI twice had Mateen on its radar, but closed down the investigations both times.

Mateen opened fire early Sunday morning at a “gay” nightclub in Orlando, killing at least 50 people and wounding another 53 in what is being described as the deadliest mass shooting in U.S. history.

As a member of one of the National Targeting Center’s advanced units, Haney helped develop a case in 2011 on a worldwide Islamic movement known as Tablighi Jamaat, as he recounts in his new book “See Something, Say Nothing: A Homeland Security Officer Exposes the Government’s Submission to Jihad.” Within a few months, the case drew the “concern” of the State Department and the DHS’s Civil Rights and Civil Liberties Office because the Obama administration believed it unfairly singled out Muslims. The intelligence, however, had been used to connect members of the movement to several terrorist organizations and financing at the highest levels, including for Hamas and al-Qaida.

In the immediate aftermath of the Orlando massacre, Haney has found that the Islamic Center of Fort Pierce, Florida, is part of a network in the United States that originated in the Indian subcontinent.

The Fort Pierce mosque’s website features a link that demonstrates its relationship to the Shariah Board of America, a division of the Rahmat-e-Alam Foundation, which operates the Darul Uloom Chicago madrassa.

The madrassa is closely affiliated with the Institute of Islamic Education, which was a major component of Haney’s Tablighi Jamaat case.

Along with the State Department’s and Department of Homeland Security’s quashing of the case in June 2012, the administration subsequently ordered the deletion of an additional 67 records related to a report on the Institute of Islamic Education.

Haney explained that this kind of information comprises the “dots” that counter-terrorism analysts connect to form cases that are used to identify potential terrorist threats.

“This case struck me as very similar to the San Bernardino shooting case,” Haney told WND on Sunday. “I suspected that they were both part of a national and international network of organizations.”

He said that using open-source information, beginning with the Islamic Center of Fort Pierce, he discovered Sunday afternoon that his initial suspicions were correct.

“It’s exactly how I would have approached a case if I was still active duty,” he said.

“The FBI had opened cases twice on him, and yet they found no evidence to charge him,” Haney pointed out.

“It means they didn’t go through the same basic, analytical process that I went through over a three- or four-hour period in which I was able to link the mosque to my previous cases.”

The Orlando Sentinel reported the FBI interviewed Mateen three times for having alleged terrorist ties. He came to the FBI’s attention in 2013 after he made inflammatory remarks to co-workers, but the investigation was closed.