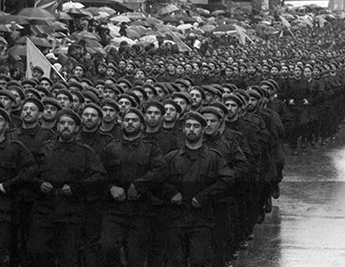 When Hezbollah first intervened on the side of President Bashar al-Assad in Syria, Israeli defense analysts saw the foray as a blessing — better to have their Lebanese arch-enemy entangled in a war in Syria. But there is increasing concern that Hezbollah is getting valuable battlefield experience in Syria, especially when it comes to large-scale, coordinated offensive operations, something the Shi’ite militia had little knowledge of before.

That practical experience could be of use in any subsequent conflict with Israel. Hezbollah commanders acknowledge the benefits.

“In some ways, Syria is a dress rehearsal for our next war with Israel,” a special forces Hezbollah commander admitted to VOA recently.

Peacetime training is no substitute for wartime experience, says John Capello, a former U.S. air attaché in Tel Aviv and now an analyst with the Foundation for the Defense of Democracies, a Washington foreign policy think tank.

Hezbollah has been in the vanguard of large assaults on Syrian rebels and not just along the border in Qalamoun and Quneitra but also further afield around Aleppo in northern Syria.

Anti-Assad rebel commanders estimate that 80 percent of the ground forces the Assad regime has deployed since the Russian bombing campaign was launched in September 2015 have not consisted of Syrians but are made up of Hezbollah and Iranian fighters along with Shi’ite volunteers from Iraq, Afghanistan and Pakistan.

“Hezbollah has become more proficient at mass force maneuvers and of tying together different battle groups — and leveraging all of that with the lessons it learned from the war with Israel in 2006, especially when it comes to defeating armor,” says Aram Nerguizian, a Mideast analyst with the Center for Strategic and International Studies. The Iranian revolutionary guardsmen and Hezbollah militiamen have been fighting side-by-side for months now, honing their ability to work together.

“It has always been the case that you have had a fair amount of synergy between the Iranians and Hezbollah in terms of tactics, command-and-control and training. ...the missions they are involved with in Syria are different from what they have been working on with Iranian revolutionary guards in the context of strategic competition with the Israelis. So in Syria, Hezbollah has had to become somewhat masterful in counter-insurgency. So you have an insurgent group that has become one of the most capable actors on the ground when it comes to a counter-insurgency role,” he adds.

Hezbollah has also learned to coordinate with other other irregular militias that have come from as far away as Afghanistan. And Israel’s arch-enemy has become used to working with the Russian military — calling in airstrikes and liaising when it comes to intelligence and reconnaissance.

“Hezbollah is learning to use more sophisticated equipment, and it is getting more battlefield experience for its fighters,” says Matthew Levitt, director of the Stein Program on Counterterrorism and Intelligence at the Washington Institute for Near East Policy, a think tank. Up to 10,000 Hezbollah militiamen are estimated to have been fighting in Syria at any one time.

“Yes, it has taken greater losses in this conflict than it has in all the wars against Israel. Some of those have been pretty important people,” says Levitt, author of the book “Hezbollah: The Global Footprint of Lebanon's Party of God.” “But overall it is seeing higher recruitment levels and more people being drawn to the cause,” he adds.

Other enhanced Hezbollah capabilities, say analysts, include using artillery cover more effectively, using drones skillfully in reconnaissance and surveillance operations and improving logistical operations to support big offensives. Analysts, as well as Israeli strategists, are now trying to work out the possible longer-term implications of Hezbollah’s increased military capabilities — as well as the deepening of its military alliance with Iran.

Nerguizian also sees the Golan as the flashpoint, one that is better terrain for Hezbollah, if it wants to use its new capabilities. The territory around the Blue Line, the border demarcation between Lebanon and Israel established by the UN, is more constraining for larger offensive operations. “They would like to maintain a stable footing in the Golan and leave troops there after the Syrian civil war is over,” says Nerguizian.

And there has been considerable activity by Hezbollah and Iranian guards in Syria’s Golan region, prompting a series of Israeli airstrikes since the start of last year. Israeli officials calculate much of that activity by their diehard foes has little to do with the current conflict in Syria but everything to do with planning for a future conflict with Israel. In January 2015, an Israeli airstrike in Syria’s Golan targeting a two-car convoy killed six Hezbollah fighters, including two prominent commanders, and an Iranian general, Mohammad Ali Allahdadi.

There have been others, as Israeli Prime Minister Benjamin Netanyahu acknowledged on April 12, when he said Israel has carried out “dozens” of air raids in Syria to prevent weapon and missile transfers to Lebanon's Hezbollah.

He chose to make his remarks while visiting a training exercise of reserve military soldiers in the Israeli-occupied Golan Heights. An Israeli official told VOA, Israel will not allow Hezbollah and the Iran revolutionary guards to set up bases in Syria’s Quneitra province along the Golan Heights.

Read the rest of the article here.