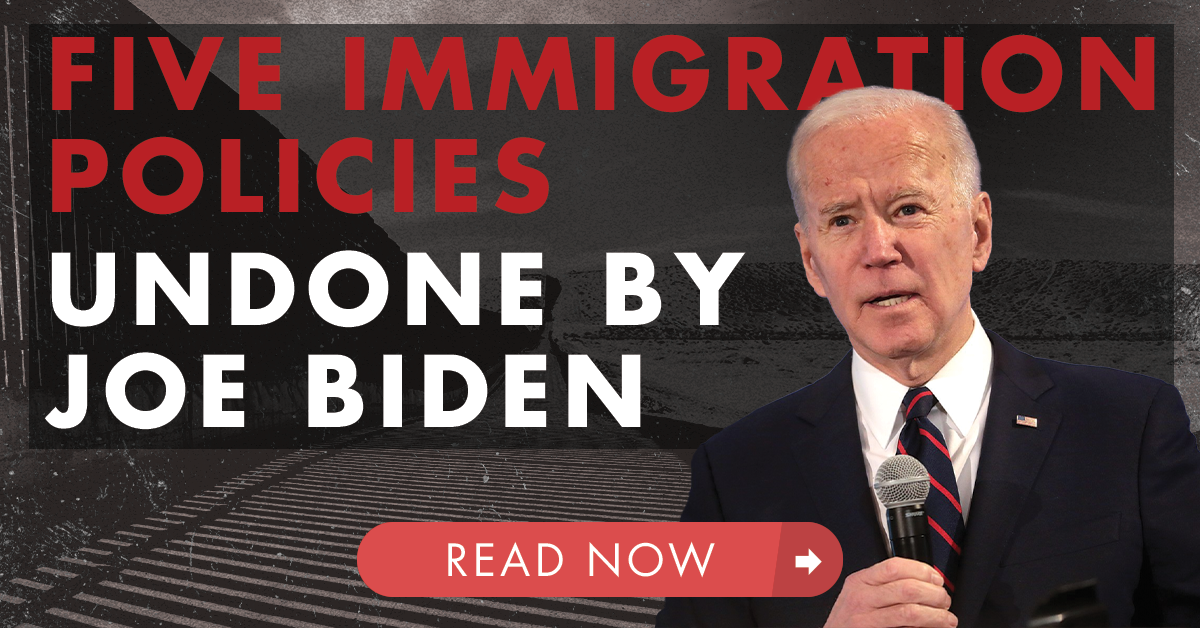 Right now, we're seeing a surge of migrants at our southern border. Our brave Border Patrol Agents are saying it's "out of control" and that they "can't continue like this."

Joe Biden at best is playing ignorant, and at worst is trying to outsourcing the problem to his Vice President.

President Trump worked to secure our border, implement fixes, and tighten security. Joe Biden has undone all of that. Here are 5 key ways that made us less safe.

Walls work. The Border Agents down in Texas, Arizona, and across our southern border will tell you that: walls work. It helps them funnel bad actors and concentrate their efforts to a singular point of entry. Listen in as Brandon Judd, President of the National Border Patrol Council, tells us more:

Through Presidential Proclamation, Joe Biden ended the travel ban on several predominantly Muslim countries. Upheld by the Supreme Court in 2018, the ban sought to stop all travel from the most dangerous parts of the world, places like Iran, North Korea, and Venezuela.

This time directly defying a Supreme Court mandate, Joe Biden has stopped enforcing the "remain in Mexico" policy. This policy required anyone seeking asylum to remain in Mexico for the duration of their court processing. Now, it's opened the door for hundreds of thousands of illegal immigrants to disappear into America and never show up for their court date.

This policy allowed asylum seekers to use designated third countries – Guatemala, Honduras, and El Salvador – as safe places for them to seek asylum from their origin countries. The clear evidence of undoing this policy is happening right now in Del Rio, Texas where over 10,000 migrants are swarming the border crossing to seek asylum.

As part of his initial action protecting us against COVID-19, President Trump's CDC issues Title 42 which allowed for rapid deportation during public-health emergencies. Not only did this help slow the spread, it also effectively closed the land border. Joe Biden has eroded this by exempting minors from this, effectively reopening the border to a new flow of unaccompanied minors.