The Beginning of the Protests

On Thursday, December 30th 2017, hundreds of Iranians began protesting in the city of Mashhad in Iran because the prices of goods have become so expensive. For many years the radical Iranian regime has oppressed the Iranian people, starving them and withholding basic human rights.

Why Are They Protesting?

The protests in Iran began because of the high prices of food and other necessities, but as protests grew anger was directed toward President Rouhani and his government's inability to revive Iran's struggling economy, create jobs, and combat alleged corruption. The bad Iran Deal that the Obama Administration pushed through awarded Iran with $100 billion in cash to help their economy; but, this money was used to fund terrorism around the world, not help the struggling Iranian economy. This radical regime puts terrorism and violence before its own people, which explains why they're revolting.

The Iranian people are chanting slogans against the Ayatollah including "death to the dictator," and “the leader lives like God while the people live like beggars."

Protests have spread from the Mashhad to cities all over the country. Thousands of people are  including:

The radical Iranian regime has responded to these protests violently. They stated that anyone who takes part in these protests will be labeled as an enemy of the state and be sentenced to death. Over 20 people have died, while over 450 people have been arrested. On top of escalating the violence, the Iranian government is continually blaming Western countries, like the United States and Israel, for the violence. The government has also blocked all access to social media in an attempt to stop the spreading of the news of the unrest.

How Has the United States and Other Countries Responded? 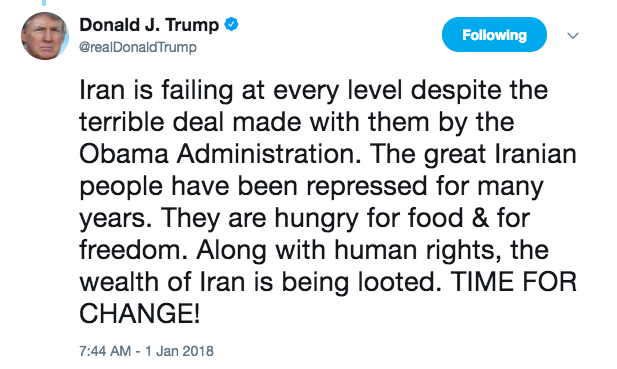 Israeli Citizens took to Instagram to express their support

How Did Iran Get Here?