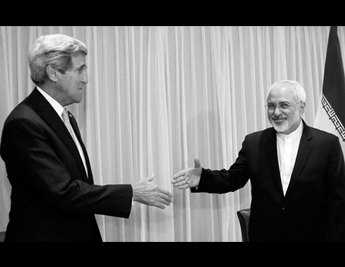 A coalition of world powers led by the U.S. government constructed an agreement called the Joint Comprehensive Plan of Action, better known as the Iran Deal. The goal of the agreement was to prevent Iran from obtaining nuclear weapons, while also trying to bring the radical nation back into the international fold.

Instead, the Iran Deal endangered the American people and her allies and enabled the world's largest state sponsor of radical Islamic terrorism.

The deal allowed for the lifting of massive economic sanctions and the release of $150 billion in assets to the world’s number one state sponsor of terrorism. It also terminated an arms embargo that kept Iran from exporting weapons in a dangerously radical region. The U.S. also lost the ability to inspect Iranian nuclear facilities to check for violations of the agreement. These provisions were made in exchange for Iran's pledge to never "seek, develop or acquire nuclear weapons." Since this deal was enacted, Iran has violated the agreement in multiple instances.

The Iran Deal promised that added restrictions would be placed on Iran's ballistic missile program. But in reality, the deal rolls back previously existing restrictions on Iran's missile program. Iran has conducted two missile tests in violation of the Iran Deal since its enactment, once in October 2015 and a second in March 2016. Both missiles have the ability to reach multiple Middle Eastern nations, including Israel.

U.S. officials hoped to have the ability to conduct "anytime-anywhere" investigations, but instead, the inspection of Iranian nuclear facilities is handled by the U.N.'s International Atomic Energy Agency. Iran is permitted to have their own inspectors report on their nuclear facilities. They also have the right to delay the inspections of nuclear sites for 24 days. This allows time for Iranians to hide any evidence of nuclear-related violations.

The lifting of economic sanctions was intended to be dependent on Iran’s compliance with the deal. Instead, Iran was immediately provided with billions in previously frozen financial assets. It is possible that Iran now uses these funds to support the multiple terror proxies operating around the world. This list of terrorist groups supported by Iran includes the Iranian Revolutionary Guard Corps, Hezbollah, Hamas and the Palestinian Islamic Jihad, to name a few.

Earlier this month, Iran Air was set to receive 80 commercial aircraft from Boeing International that would most likely be used to supply military support to terrorist groups that repeatedly threaten the U.S. and her allies. It was also stated in a German intelligence agency report that Iran actively sought illicit nuclear technology from independent German companies.

President Obama, John Kerry, Ben Rhodes, and the rest of the Administration signed the deal that let all authorized all of these things. In 10-15 years when key provisions of the deal expire, Iran will pose an even greater threat to the security of the U.S. Because of economic sanctions relief and the new ability to trade in the international markets, Iran will likely be stronger economically, politically, socially, and militarily in 10-15 years. The world’s leading state sponsor of terrorism may be in a position to create a nuclear weapon very quickly and already possesses missiles capable of carrying nuclear warheads to any of its regional neighbors, including Israel and Saudi Arabia.

In one year since the signing of the Iran Deal, we have seen Iranian citizens chant "Death to America and Israel." We have seen multiple, blatant violations of the restrictions that were established by the deal. We will continue to see much of the same.

It's time for the United States government to realize that a nation that has been named the number one state sponsor of radical Islamic terror is not a nation that should receive benefits while seeking nuclear weapons. One year later, it is time for the United States to realize that we need to get tough on Iran, for the safety of America and the world.