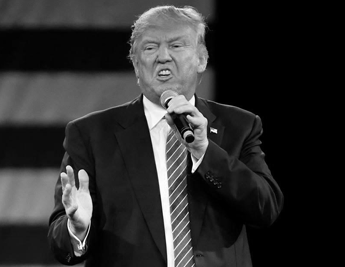 On who he consults for national security: "The shows."

"Well I really watch the shows. You really see a lot of great, you know, when you watch your show and all of the other shows, and you have the generals and you have certain people that you like," Trump said. National security is a serious issue, and by getting his information from "the shows," Trump shows how seriously he takes it.

In addition to "the shows," he consults himself. Unfortunately, he has no record to draw from an there's no way to know how well he can navigate foreign policy. His lack of advisors in this area is a dangerous policy to have while running for president.

He wants to remain neutral on Israel-Palestine

Trump believes that it is possible to remain neutral between Israel and Palestine while brokering a deal between the two. He doesn't realize that children in Palestine does not want a two-state solution, they want Israel wiped off the map.

He wants to alienate our allies by making them pay for support.

Instead of supporting our allies, he wants them to pay the U.S. for their protection. Extortion shouldn't be used on allies just to save a little bit of money.

He didn’t know the leaders of the largest terrorist organizations.

In an interview on foreign policy, Trump acknowledged that he didn't know the leaders of any foreign terrorist organizations. He said it wasn't important yet for him to know, after confusing the Quds and the Kurds. This lack of awareness is dangerous when dealing with other countries.

He doesn’t want to take action against North Korea.

Even with North Korea's recent missile tests, Donald Trump doesn't want the U.S. to take action. This policy is dangerous because it may put North Korea on the path to developing nuclear weapons.

Donald Trump's policies pose a threat the safety of Americans. Share this article to show others his national security gaffes!