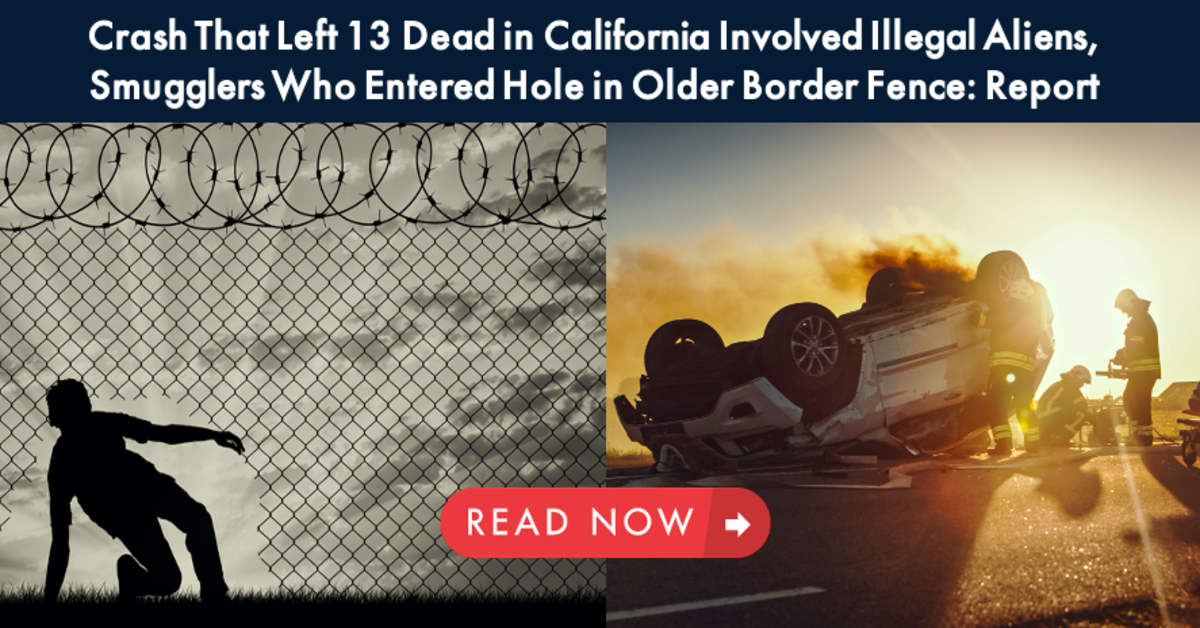 A mass casualty car crash that resulted in at least 13 deaths near the U.S.-Mexico border in southern California involved illegal aliens and smugglers who drove through a hole that was cut in a section of the border fence, which was not part of former President Donald Trump’s wall.

Fox News reported that Border Patrol sources informed the network that the crash involved “human smugglers and 25 illegal immigrants” who were jammed into a single Ford Expedition, which normally can only seat eight people. The area where the fence was cut was constructed between 2007 and 2009 and was not part of the Trump administration’s wall.

“Two vehicles crammed with illegal immigrants inside had driven through the ten-foot wide hole in the early morning hours of Monday’s midnight shift, sources say, somehow evading a mobile camera system set up nearby,” Fox News reported. “The sources added that the border patrol was not looking for the smugglers until they were notified by the Imperial County Sheriffs Office about the crash, which occurred about 8 miles north of where the fence was cut.”

Law enforcement officials are reportedly working with the Mexican consulate to identify the victims — who range from 20 to 55 — so their families can be notified.

The Washington Post reported that El Centro Regional Medical Center chief executive Adolphe Edward said in an interview that he believed that the victims from the crash were illegal aliens, using the term “undocumented immigrants,” but later suggested that using that term was inappropriate for a healthcare professional, saying they “don’t use the term undocumented in the hospitals.”

“To us, these folks that came to us are patients,” Edward said.

Two Democrat U.S. lawmakers warned this week that President Joe Biden’s immigration agenda will be a disaster for the U.S. and both specifically mentioned human smugglers who know how to work the system for their financial benefit.

Rep. Henry Cuellar (D-TX) “hopes the administration continues using a Trump-era public health order to quickly expel migrant adults and families, at least during the pandemic,” Axios reported. “He said smugglers will likely use the shift in immigration tactics from the Trump to the Biden administration to convince migrants to come to the U.S.”

“The bad guys know how to market this,” Cuellar said.