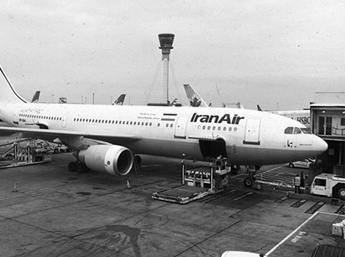 
Boeing Pushed and Profited Off the Iran Deal

But the American aerospace giant isn’t exactly publicizing the fact that it paid a lobbying firm to “monitor” the nuclear agreement that made its $25 billion sale to Tehran possible. Or that Boeing has on its payroll a former top Clinton administration official who used his clout to garner support in the corridors of powers for the Iran deal.

Thomas Pickering, one of the country’s most respected diplomats and a and former ambassador to Israel and the United Nations, has been quietly taking money from Boeing while vocally supporting the Iran nuclear deal—testifying before Congress, writing letters to high-level officials, and penning op-eds for outlets like The Washington Post.

Pickering confirmed via email—from his Boeing corporate email address—that he was on staff at the company from 2001 to 2006 and has been a paid consultant for them ever since.

“Hills” refers to Hills & Company International Consultants, where Pickering is a principal. In a previous email, Pickering referred to his “contract arrangement with Boeing” in the present tense.

He didn’t respond to a follow-up email asking if he disclosed his relationship with Boeing when discussing Iran with members of Congress and with the press. The Daily Beast found no evidence that he made a habit of making such a disclosure, and will update this piece if we do.

News of the impending sale highlights just how much Boeing and Iran’s state-owned airline both stand to benefit from the nuclear agreement for which Pickering advocated. The fact that Pickering did not regularly disclose his relationship with Boeing—which, as is now obvious, had a massive financial interest in the implementation of the Iran nuclear agreement—has drawn criticism from government transparency advocates, who consider it to be a violation of ethical standards.

Neil Gordon—an investigator for the Project on Government Oversight, a Washington watchdog organization—said Pickering should have been upfront about his work for Boeing when testifying before Congress on the deal and making the case for it in op-eds for major publications.

“In Pickering’s case, he has a direct connection to Boeing, which I think should be disclosed,” he said.

Boeing, he added, clearly had a financial interest in the Iran nuclear agreement. The deal reopened the door to American business dealings with Tehran, which time and again had looked to restock its aging fleet of planes with newer, Western models.

Gordon compared it to a controversy in 2013, when many think tank scholars and military experts arguing for a U.S. military presence in Syria didn’t disclose that they had financial ties to defense companies that stood to benefit from the intervention. Media outlets presented these commentators as independent, Gordon noted, when they weren’t. And, he added, Pickering’s situation is similar.

Over the past few years, Pickering has been one of the most vocal and visible advocates for the nuclear agreement with Iran. On June 19, 2014, he testified before the House Armed Services Committee about his views on the need for a comprehensive agreement with Iran. He did not mention Boeing in the disclosure form he provided to the committee prior to his testimony. Boeing also isn’t mentioned in his bio that the House kept on file.

Besides testifying before Congress, Pickering also signed a letter on July 7, 2015, to congressional leadership, along with other former diplomats, urging them to support the nuclear agreement. That letter didn’t disclose his connection to Boeing, and it drew broad media coverage, including from the Huffington Post, Politico, and the AP. None of those reports noted his work for Boeing. The White House also cited the letter in its publication “The Iran Nuclear Deal: What You Need to Know About the JCPOA.” Boeing is not mentioned anywhere in that document.