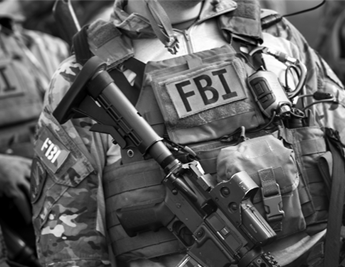 It is unclear from court filings whether Sebastian Gregerson, aka Abdurrahman Bin Mikaayl, was planning an attack and why he allegedly was purchasing explosives from an undercover FBI agent.

Court records chronicle a 16-month undercover investigation that started after a tipster told the FBI that Gregerson, 29, had grenades and bazookas.

The complaint emerged Monday amid heightened concern about terror-related attacks and fatal shootings of law enforcement officers, including five officers killed during an attack last month in Dallas.

“I am unable to comment beyond what’s contained in the complaint,” said Gina Balaya, spokeswoman for the U.S. Attorney’s Office in Detroit.

Gregerson, who has a long brown beard and nearly waist-length hair, quietly read a copy of the criminal complaint Monday while wearing handcuffs and ankle chains during a brief arraignment in federal court. He faces up to 10 years in federal prison if convicted of unregistered possession of a destructive device and unlicensed receipt of explosive materials.

Gregerson, who is being held without bond temporarily, is due back in federal court Thursday when a judge could keep him locked up while awaiting trial.

Two Gregerson supporters, including a woman wearing a hijab, declined comment outside federal court. Gregerson’s court-appointed lawyer could not be reached for comment.

A Facebook account belonging to a user with the same name, and a hometown of Dearborn, includes an image of a man riding a horse and carrying an Islamic State flag.

Seamus Hughes, deputy director of George Washington University’s Program on Extremism, said Islamic State supporters have used the same photo in the past.

“That suggests to me that he is a supporter (of the Islamic State),” Hughes said.

“Abdurrahman Gregerson” works in logistics and supply chain at Target and previously worked at Wal-Mart, according to a LinkedIn profile. The profile says he is studying criminal justice and law enforcement administration at Henry Ford Community College and lists firearms instruction, survival training and security as skills.

Since April 2015, Gregerson has purchased an arsenal of weapons, hundreds of rounds of AK-47 ammunition, tactical gear, ski masks and a training video for using a Russian assault rifle.

In June, he bought commercial-grade road spikes that can be used to slow or disable vehicles, according to a 16-page criminal complaint. He bought the spikes on eBay, the FBI alleged.

“In my training and experience, and that of other agents upon whose expertise I am also relying, the purchase of training versions of these weapons makes it unlikely that the weapons were purchased for recreational use, such as hunting,” an FBI special agent wrote in the complaint.

Gregerson made several firearms purchases in recent months while under FBI surveillance, according to the complaint.

In June, undercover agents learned Gregerson visited a Dearborn outdoors store and purchased a semi-automatic rifle, according to court records.

Days later, he bought a pistol from a “white male” in a gas station parking lot in Belleville, the FBI alleged.

In recent months, Gregerson has had several recorded conversations with an undercover agent during which he allegedly talked about weapons, specifically grenades and grenade launchers, according to court records.

Gregerson said he possessed a legal grenade launcher and described tactics he would use to commit an attack on a building with the grenades, according to the FBI.

Gregerson also talked about how he could make homegrown high-explosive grenades, which are illegal, using hollow shells.

On June 21, court records indicate Gregerson talked about using code words to refer to high-explosive grenades. He also discussed obtaining a larger grenade launcher that is classified as a destructive device under federal law and must be registered with the Bureau of Alcohol, Tobacco, Firearms and Explosives, according to the complaint.

Gregerson indicated he wanted to buy rounds for the grenade launcher.

The undercover agent told Gregerson he had a contact who worked in a gun shop on a military base who might be able to supply the grenade launcher.

Gregerson told the undercover agent he wanted to buy smoke grenades, fragmentation grenades and an anti-personnel mine that contains C4 explosive and hundreds of steel balls that rapidly shoot outwards upon detonation, court records show.

Gregerson called the mines “a magical piece of equipment,” according to court records.

Gregerson invited the agent to his home July 15 and displayed part of his arsenal, including the smaller grenade launcher, grenades, a loaded AK-47 rifle, a machete, ammunition and a ballistics vest with military-grade plates.

The agent told Gregerson a shipment of smoke and fragmentary grenades would be available Sunday, according to court records.

“In this same conversation, Gregerson discussed with (the undercover agent) his plans for a full tactical response to law enforcement if they came for him, including the use of grenades,” according to court records.