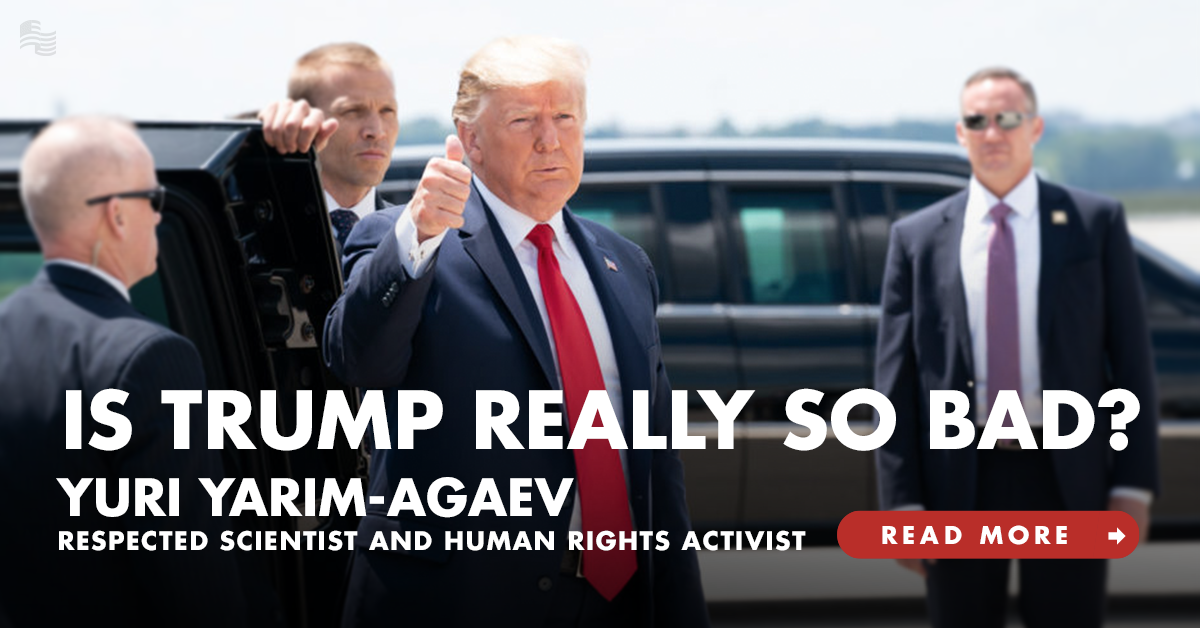 
"Is Trump So Bad?" by Yuri Yarim-Agaev

The first thing the recent U.S. election showed was that there was no crushing victory for the Democratic Party, the so-called blue wave predicted by the press and opinion polls. Democrats have lost seats in the House of Representatives; Republicans are likely to retain the Senate. Joe Biden narrowly won the presidential election: in crucial states, the difference in votes was very small.

All this suggests that this election - again contrary to the predictions of the press - has not shown that Donald Trump's policies are rejected by an overwhelming majority of Americans. This is confirmed by the fact that opinion polls conducted just before the election showed that more than half of Americans believe that they are better off, or at least, noт worse than four years ago. And this is six months after the beginning of the pandemic and caused by it the sharp decline of the economy!

All this is not surprising, because, under Trump, a lot of good things have been done. His tax reform, the repeal of many of the rules that hindered the development of the economy, led to record low unemployment and a sharp increase in income. A terrorist Islamic caliphate was destroyed and peace was established between Israel and several Muslim countries. To combat the pandemic, Operation Warp Speed has been launched, which has not only helped to develop vaccines in record time but also ensures their rapid mass production and distribution.

I'm not a big Trump fan. I do not agree with many things in his foreign policy, with his acceptance of totalitarian regimes and their leaders, with the dropping concerns for human rights in these countries, and for his lack of support of the dissidents fighting for them. Yet, I pay tribute to his successful programs. I don't like many of Trump's statements. Yet, I separate them from what was done during his presidency. And I don't equate Trump's personality with the movement that brought him to power and brought with it many constructive ideas that have been successfully implemented over the past four years.

But this is not the way many people think. When I ask Biden supporters whether anything good has been done under Trump, they say without hesitation, "Absolutely nothing." And then they immediately say that Trump is racist and misogynist. As if that were even true, it could have something to do with reducing unemployment or increasing income, which benefits both blacks and women. But those who hate Trump can't separate these things: If Trump is bad, so bad is everything that's been done under him. All that has to be eliminated. Carthage must be destroyed!

Such total denial is the result of the polarization of the country, which determines the current political situation in the United States and which Biden is likely to follow. Apparently, he will not leave a stone unturned from many of Trump's programs, and will completely reverse them. But such a reversal means replacing programs with opposite ones, and those which were successful, with unsuccessful ones. The baby will be thrown out with the bathwater.

Again, taxes would be raised; senseless restrictions in the economy would be imposed. Even in a successful vaccine development and distribution program, Democrats want to change the way it is distributed. I, for example, because of my age, expected to be in the first group of recipients of this vaccine, and now I may find myself at the end of a slow-moving line. But my personal concern is unlikely to change Biden’s mind. The repeal and replacement of many of Trump’s programs are at the top of his administration's agenda.

The next thing democrats may try to do is perpetuate their power. At the very least, to do everything possible to ensure that the Reagans and the Trumps could never be elected presidents again. To do this, they need to change the electoral system.