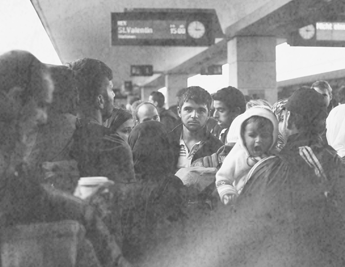 By Patrick Goodenough
June 1, 2016 | 4:19 AM EDT
The number of Syrian refugees admitted into the United States jumped to 1,037 during May – an increase of 130 percent over the previous month – but the proportion of Christians among them remains miniscule: two Christians (0.19 percent) compared to 1,035 Muslims.
May’s figure of 1,037 Syrian refugees brings the total number since the beginning of 2016 to 2,099 – compared to 2,192 for the whole of 2015, according to State Department Refugee Processing Center data.

And since the conflict erupted, of a total of 4,646 Syrian refugees admitted, 60 (1.3 percent) are Christians; 4,422 (95.1 percent) are Sunni Muslims. The remaining 163 include Shi’a, other Muslims, Zoroastrians, Baha’i, Jehovah’s Witnesses, Yazidi, and refugees identified as “other religion” or as having “no religion.”

Syrians of all faith and ethnic backgrounds have been fleeing their homeland, with almost five million now registered by the U.N. refugee agency UNHCR as “persons of concern.”

They have done so to escape the violence and deprivation generally, or to get away specifically from ISIS, other jihadists rebel groups, or the Assad regime – which is itself a minority regime that has committed atrocities, including alleged war crimes, against majority Sunnis and others.

Although Syrians of all stripes have been affected, the number of Christians among those admitted into the U.S. – 1.3 percent – remains significantly smaller than the proportion of Christians in the total population when the war began – an estimated 10 percent, according to the CIA World Factbook.