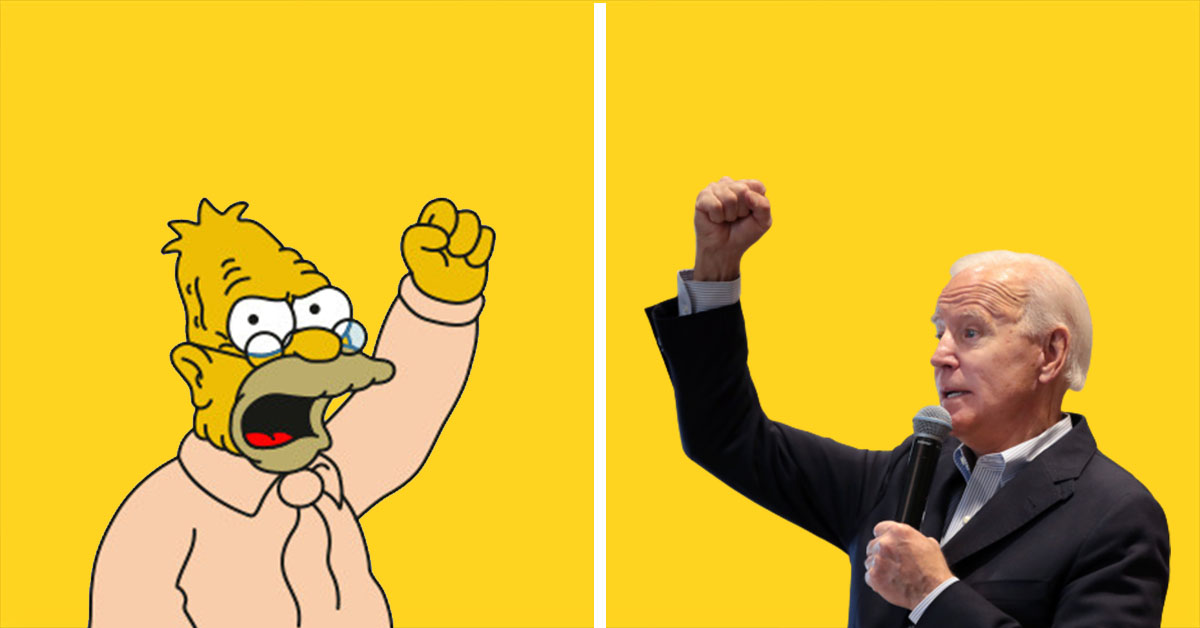 
11 Clueless Joe Biden Moments that Remind Us of Grampa Simpson

Just like Joe Biden, the grandpa from The Simpsons left us laughing and puzzled. Thankfully, Grampa Simpson isn’t running for President. Here are 11 moments Joe Biden reminded us of Grampa Simpson during his presidential run.

1. When he started pushing and swearing on a campaign tour.

Joe got testy without his staffers there to calm him down. On the plus side, this might’ve been the most energetic moment of his campaign.

2. All the times he’s been busted for being too touchy.

Is Joe Biden's Touchiness Out Of Touch?

He has a habit of sniffing women’s hair and getting weirdly touchy.

3. When he started rambling nonsense about hairy legs and cockroaches.

The worst part about this rant is that we aren’t even sure that it’s the most nonsensical one he’s ever given.

4. When he forgot what year it was.

Biden Forgets What Century He's In

It’s bad enough he doesn’t remember what day it is, here he was only off by a hundred years.

5. When he made a 70-year-old reference by calling someone a “lying dog-faced pony soldier.”

By quoting from 1952 movies and insulting students, Joe is reminding us of his age and how out of touch he is with younger generations.

6. Going 3 months without a single media sighting or press conference.

When he finally did come out of hiding, the American public felt like they hadn’t seen him in ages.

7. When he used his government roles for his son to embezzle funds.

Joe received bribes so that Hunter Biden could get rich from his father’s political career. Wait, this one wasn’t so clueless actually.

8. When he fell asleep in the middle of an interview.

We know Joe, repeating the same failed agenda over and over again gets boring.

9. When he didn’t know how to work a cell phone.

Joe Biden Struggles to Use a Cell Phone

10. When he told millions of people to go to the wrong website.

11. When he lied about taking a cognitive test.

He may have really believed he took a brain test, and that could be even scarier than lying.